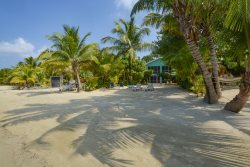 Estimado cliente: la traducción el español se encuentra después del texto en inglés.
Payment terms: 50% of the total rental amount is due immediately to reserve a home. The balance is due 45 days prior to arrival date. If the reservation occurs within 45 days of arrival, full payment is due to reserve a home. Non-payment of rent is considered a cancelation and subject to cancelation policy.
Credit Card Policy: It is Island House policy that when a guest pays by credit card the guest is required to show the credit card(s) used for payment, along with identification for the card holder, at check in.  At check in we will take a carbon copy of the card and a photocopy of the guest's ID.  In the case of a card that has expired, we will need to see the updated card for that same account.  Failure to bring the card used in the payment transaction(s) will result in the immediate forfeit of the rental by the guest.  This is a STRICT policy and NO exceptions will be made.

Number of guests:  Only the number of guests agreed to on the reservation are allowed to occupy the home. Violation of this rule will cause forfeiture of the entire rent including deposit and immediate tenant eviction.
Air conditioning: air conditioning charges may apply with some homes. Please check individual property details for rates.
Prices: Shown are in U.S. Dollars and are subject to change without notice.
Shortened stay: Stays shortened for any reason will not be allowed a refund or credit.
Minimum Stay: One week (7 nights) at Christmas, New Years and Easter, 3 nights at any other time.
Cancelation policy:  All cancelations are to be in writing. Booking confirmation payments are refundable for a maximum of 40% of that confirmation payment if cancelation is received at least 60 days prior to arrival, less bank charges. Alternatively, the reservation may be rescheduled within six months of original reservation dates, subject to availability. There may be an additional charge for booking in a more expensive season. Cancelations received within 60 days of reservation arrival date are non-refundable and non-changeable.
Check-in: Check-in time is 3:00 PM. Guests are required to check in at our office prior to going to their rental home.  Check in simply involves signing of the rental agreement, payment of the security deposit and payment of any outstanding balances. Upon completion you will receive keys to your vacation home.
Check-out: Check-out time is 10:00 AM. This policy is in place to make sure every guest’s arrival is as pleasant as possible. Housekeeping and maintenance personnel must provide services between occupancies for every property. In some cases we may be able to accommodate guests with earlier or later times, but those times are not guaranteed.

Jump to a Rental