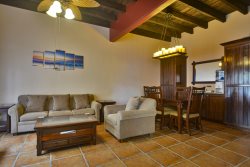 Although Roatan is humid year around, rain fall can be scarce during the hot season, resulting in many beautiful, sunny days.

Roatan is located at 16° 18' 0" N latitude and 86° 33' 0" W longitude, which places it almost midway between the Tropic of Cancer (23° 30' 0" N latitude) and the Equator. This geographical location gives the island a Tropical climate.

On Roatan the dry season starts in April and goes through mid to late July. This period is very dry and the weather consists of sunny day after sunny day with the temperature increasing from an average of 29°C in April, to 30°C in July. This period is very warm and somewhat humid although the humidity on the Island is moderated by a steady easterly trade wind that blows throughout this period. For sun lovers this is as good as it gets.

The shoulder season starting in March shows a steady decrease in rainfall (from the peak rainfall in February), which continues into the dry season starting in April. This is a very pleasant time of year with a few scattered showers to cool things off slightly and temperatures just slightly cooler.

The first rainy season starts as early as mid to late June but more typically mid to late July and goes until early September followed by a short dry spell during later September and early October. The late fall is characterized by good stretches of weather with short periods, a day or two, of rain followed by a week or more of good weather. This can often be a great time since the occasional rain tends to offer some relief from the heat and is very refreshing, with this pattern continuing December through mid January.

For a 5-day forecast for Roatan, click on the following link:

Jump to a Rental